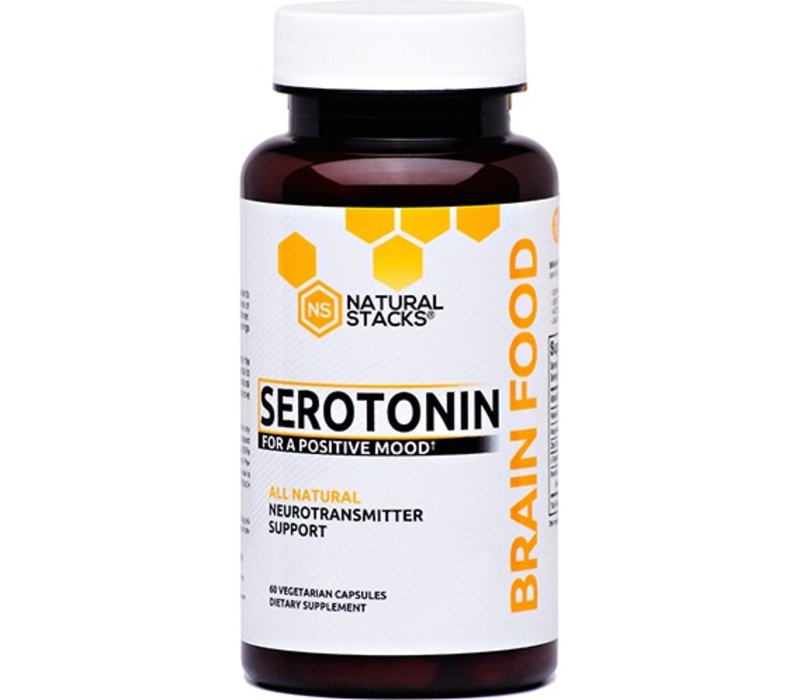 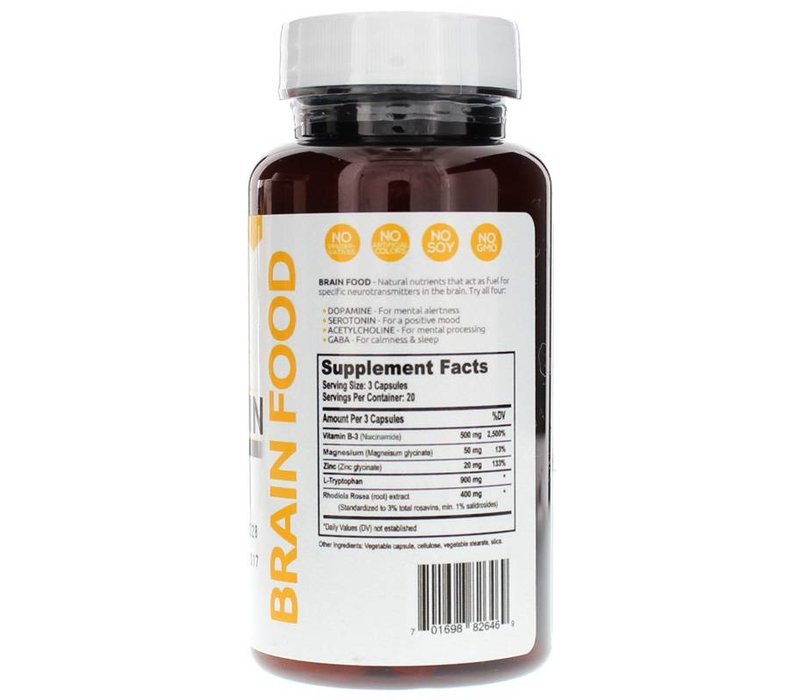 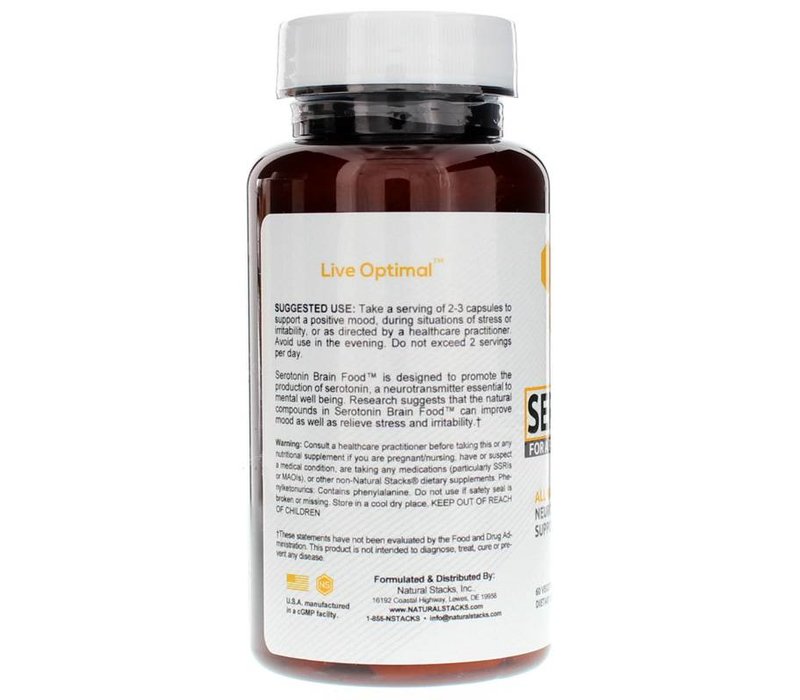 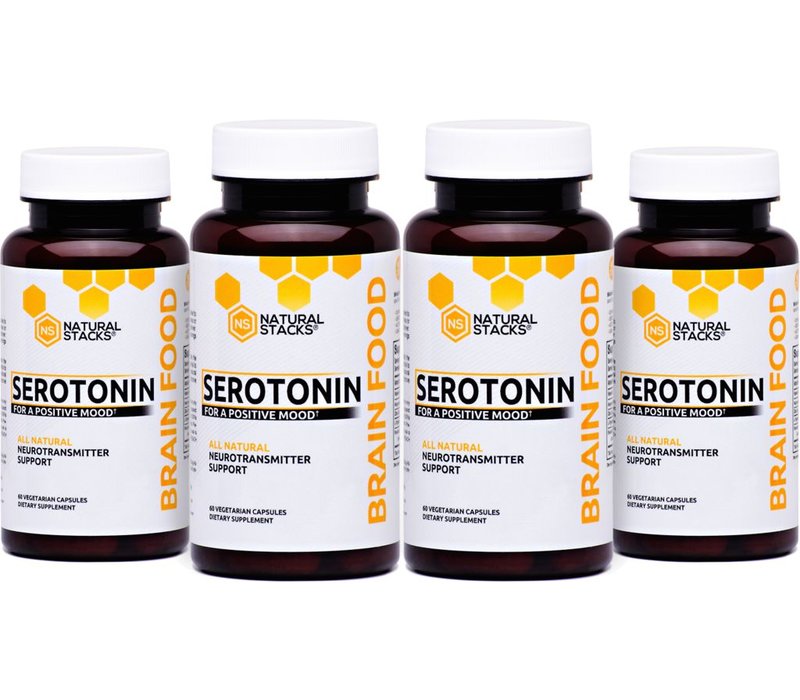 €41,15
Serotonin is primarily found in the gut, blood platelets, and the central nervous system, with a small amount also produced in the brain.
Serotonin is thought to be responsible for a sense of wellbeing and happiness
En rupture de stock

L-Tryptophan is an essential amino acid which is converted into serotonin in the brain. The most common dietary sources of tryptophan include nuts and seeds, meats and dairy, fish and legumes.

Vitamin B3 helps to increase serotonin levels in the blood stream, increasing its ability to regulate the digestive and nervous systems. Magnesium increases serotonin concentration in the brain, while Zinc can increase the density of serotonin receptors in the brain, helping to improve mood and reduce stress.

Having been used in traditional Chinese medicine for hundreds of years, studies have shown that Rhodiola Rosea can have an antidepressant effect. It helps improve mood, reduce depression, and can provide an uplifting boost in performance and energy.

What is “brain food”?

Neurochemistry - the chemical patterns and processes that cause your brain to function as it does - is highly complex. It varies significantly between individuals, and is heavily influenced by a large range of factors. Your diet, exercise habits, sun exposure, social group and genetics all have a role to play in your brain’s chemical behaviour.

Most of us do not get enough of everything we need every day to keep our brain function 100% optimized. That’s why supplementing with brain food can give you such an edge.

Brain food are natural nutrients that act as fuel for specific neurotransmitters in the brain. They can be taken daily to boost various states of optimal performance.

By addressing any deficiencies or imbalances in the delicate neurological system, you can increase your ability to concentrate, regulate your energy, and balance your mood.

The importance of Serotonin

Serotonin is a neurotransmitter that is associated with a sense of wellbeing and happiness, as well as a healthy appetite and digestive system, constricting smooth muscles, and transmitting impulses between nerve cells.

Getting your serotonin levels balanced and in an optimal range can have a profound influence on your health and quality of life. When your serotonin is being produced at the optimal pace, you will feel calm and healthy. Your mood will be positive, stable, and well balanced.

For A Positive Mood

SUGGESTED USE: Take a serving of 2-3 capsules to support a positive mood, during situations of stress or irritability, or as directed by a healthcare practitioner. Avoid use in the evening. Do not exceed 2 servings per day.

As a precursor to serotonin, this essential amino acid is directly converted into 5-HTP. It’s found in many foods such as egg whites, soybean, and turkey.

An essential vitamin that is also a necessary cofactor for the proper catabolism of fat, carbohydrate, protein, and alcohol. It’s also closely involved in cell signaling and DNA repair. It’s used most extensively in the brain, gut and skin, which have a high cellular turnover rate. Our Vitamin B-3 source is a niacinamide, which has been carefully selected to be non-flushing - many other Vitamin B-3 sources are niacin, which can cause uncomfortable skin flushing.

Magnesium glycinate has a positive impact on attention, memory, and stress reduction. Utilizing the essential amino acid glycine, this form of magnesium has a calming effect on the brain.

An herb native to the Arctic and northernmost parts of Europe and Central Asia, Rhodiola Rosea has been used in herbal medicine for many years. It’s associated with improvements in mood, reduced stress and depression, and overall increases in physical and mental well being and performance.

Serotonin is a neurotransmitter responsible for mood, fear, aggression and anxiety. It plays a large part in the digestive process as it interacts with neurons present in the gut. Healthy serotonin levels allow one to be in the moment instead of becoming drawn into negative thought patterns.

Where does serotonin come from? It starts with tryptophan. Tryptophan is an essential amino acid that is a precursor to serotonin. It is found in many foods such as egg whites, soybean and turkey and is also available as a nutritional supplement.

It is converted into 5-HTP by the enzyme tryptophan hydroxylase(TH). TH is a key rate limiting enzyme that controls the production of 5-HTP in the body. TH comes in two variants. TPH1, which is present in the gut and the peripheral nervous system, and TPH2, which is primarily expressed in the central nervous system.

Serotonin outside the CNS is not particularly interesting for cognitive enhancement. It is however suspected that a lack or excess of serotonin in the digestive tract can lead to irritable bowel syndrome. Some drugs with antidepressant effects are actually used to control certain intractable digestive problems, presumably by having an effect on the neurochemical aspects of digestion.

Serotonin is an agonist for many different serotonin receptors in the brain. Many antidepressant drugs developed over the past 30 years, known as SSRIs, have been developed in order to keep serotonin active in the synaptic cleft by reducing the activity of the SERT enzyme.

The theory behind this is that stimulating serotonin receptors via increased synaptic serotonin will improve and alleviate depression. Exercise, a well studied treatment for depression, has been investigated as a serotonin production enhancer through various mechanisms.

Serotonin is broken down and then processed into melatonin via methylation. Melatonin is crucial for sleep. Methylation is also active in the dopamine system and breaks down norepinephrine to epinephrine. Supplementation of melatonin has been shown to increase serotonin in animal models.

Another system that has a profound effect on serotonin metabolism is regulated by the hormone cortisol.

Cortisol pathways, which are induced by stress, cause an increase in serotonin reuptake, possibly contributing to depression. Increased cortisol also may increase the production of N-formyl-L-kynurenine by increasing the activity of tryptophan 2,3-dioxygenase. This pathway uses up L-Tryptophan in the eventual production of niacin instead of serotonin. Niacin is produced from tryptophan in competition with the serotonin pathway. Supplementing niacin thus may free up tryptophan to be processed into serotonin.

Magnesium is important in processing serotonin. A correlation has been shown between low magnesium levels and depression. Experimental evidence has also shown that magnesium is needed as a cofactor of tryptophan hydroxylase, which converts tryptophan into 5-HTP, a serotonin precursor, and magnesium is also needed for binding serotonin. It also increases activity at the 5-HT1A serotonin receptor.

Zinc also enhances outcomes in unipolar depression. The mechanism of action on serotonin is that it modulates uptake of serotonin into cells.

Herbs that have exhibited serotonin reuptake inhibition activity like St. John’s Wart and herbs with observed MAO-A inhibition activity like resveratrol are powerful increasers of serotonin and should only be used in situations where there is a significant deficiency. Berberine heavily influences the 5-HTT transporter while having positive health benefits and being well tolerated over long periods of time.

Serotonin is a regular and reliable system that responds to supplementation and has positive effects on mood and energy. There’s a huge difference between low levels of serotonin and optimal levels in how you think, feel and perform.

What is Serotonin Brain Food?

Serotonin Brain Food is designed to promote the production of serotonin, a neurotransmitter essential to mental well being.

Is Serotonin Brain Food regulated by the FDA?

As a dietary supplement Serotonin Brain Food’s package labeling, ingredients, and manufacturing quality are regulated by the FDA pursuant to the Federal Food, Drug and Cosmetic Act.